Ebola Outbreak in West Africa - One Year On

EBOLA, A DEADLY HAEMORRHAGIC FEVER, HAS BEEN PART OF THE DAILY NEWS AGENDA SINCE IT BEGAN SPREADING IN WEST AFRICA IN EARLY 2014 – FASTER THAN THE EFFORTS TO CONTROL IT. IT IS NOW THE LARGEST EBOLA OUTBREAK EVER RECORDED, INVOLVING FOUR COUNTRIES SIMULTANEOUSLY.

One year on, there have been some success stories. Preparedness and swift action in Mali for example, made a big difference, stopping further spread of Ebola. 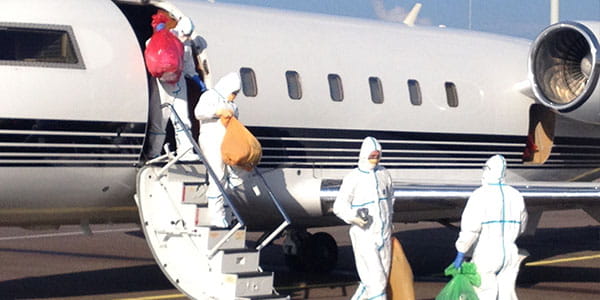 Even though there are signs that rates of infection are slowing in some of the worst-hit areas, it would be premature to read success into the operation to stop this challenging outbreak of the disease.

International SOS was quick to take action when the deadly disease was first recognised in Guinea in March 2014 and has since been supporting clients and partner organisations around the clock in the fight against Ebola. Between March and November 2014 the organisation received over 1,700 Ebola related calls. Amongst these were request from government agencies, non- governmental organisations (NGOs), health authorities and schools / universities from all over the world.

MTN Group, an International SO client since 2010, is a leading mobile telecommunications operator in emerging markets, connecting 219.2 million people across Africa and the Middle East.

Zain Reddiar, Head: Group Expatriate Management services at MTN, said: “As our business expanded across 22 countries we found a real need for International SOS’ services. If we did not have this relationship we would feel far more vulnerable. We cannot leave anything to chance and  wait for something to go wrong: Education, prevention and preparation have always been really important for us. Our work with International SOS is one proof point that shows our people that we are an organisation that cares and takes their wellbeing seriously. The ongoing Ebola outbreak is a case in point. The moment we realised this could be a concern for our people and our operations, we talked to International SOS. The response was immediate – something we needed and came to expect. The information and advice provided enabled us to respond appropriately to media enquiries, to governments, to our staff and their families, and to local communities.

You can never put a value on a person’s health and safety – their wellbeing is the number one priority. We know the welfare of an employee assigned to a foreign country takes precedent over any cost concerns, but we do believe the real value we get back as a result of our relationship could easily be ten times or more what we actually pay in membership.”

In September 2014, International SOS evacuated two Dutch doctors from a remote part of Sierra Leone to Amsterdam where they could access potentially life-saving medical support. Dr Nick Zwinkels and Dr Erdi Huizenga were exposed to Ebola whilst working on the Ebola frontline in Yele for the Lion Heart Foundation, a Dutch medical charity. The objective of the Lion Heart Foundation is to improve the level of health care in central Sierra Leone, mainly focusing on mother and childcare. At their remote clinic, the doctors mostly treated malaria but their work also brought them into direct contact with three patients who had died from the Ebola virus. This high-risk exposure triggered the urgent need to evacuate them. The doctors were temporarily held in quarantine at a UNICEF facility as  International SOS worked with the Dutch and Sierra Leone governments and Public Health officials to ensure a smooth border crossing. The doctors were repatriated by long-range Challenger 600 air ambulance. After a short refuelling stop in Morocco, they travelled nearly 7,000 km to Schiphol Airport in Amsterdam.

When asked about their experience Dr Zwinkels said: “After we were exposed [to the virus], initially we did not think that we would need to be evacuated. We called the RIVM (Dutch Ministry of Foreign Affairs and Health) for advice. They indicated that it was important to be repatriated to Holland before we developed any symptoms of the disease. International SOS would be our best option."

“From the moment International SOS became involved, they had regular contact with us until our flight departed. The pre- flight assessment at the airport by their medical team was very good. Both the doctor and the nurse were very experienced with this type of situation. They acted proficiently and helped us and the cabin crew feel at ease.”

Dr Huizenga added: “The chances you end up in a situation like this are very little when you work in a ‘treating hospital’ and stick to the protocols. When you work in a holding centre you have to make sure you quickly isolate patients in order to minimise the chances of unprotected contact with Ebola patients. Once you have had unprotected contact, do not wait but ask for professional advice in the right places, like we did.”

International SOS has pioneered a range of preventive programmes over the past 30 years and offers an unparalleled response to emergencies. Ebola exposure poses unique complexities for evacuation, including: need for mobile isolation facilities, rigorous border crossing requirements and public health authority permission, screening procedures and quarantines as well as a high level of media attention.

International SOS is continuing to protect and support clients in responding to the outbreak. It established a comprehensive, continually-updated Ebola website early in the outbreak, which so far has had more than 600,000 visitors. recognising the situation for the public health emergency it became, the company decided to make the site available to anyone who wanted reliable and useful information about Ebola. As such, the site has become a trusted resource not only for clients, but for some non-profit groups who need it most, and government health departments for example. In addition to its dedicated website, International SOS has recently released a new mobile app designed to help share medical and travel information on Ebola. The free Ebola App provides access to key sections from International SOS’ dedicated Ebola website and was an instant success with 4,000 downloads within two weeks of being made available.

Dr Doug Quarry, Group Medical Director Medical information and Analysis at International SOS, said: “The ongoing Ebola outbreak has become a global health emergency where rapid communication of advice and information is absolutely critical. We know people want up-to-date, accurate information as quickly as possible. They want it from a trusted source. And in today’s multimedia world they want it in their hands wherever they are. We designed this app to try and help meet that demand.” 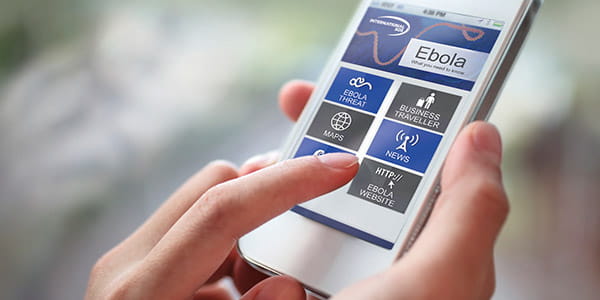 Ebola can spread through the air.

No. The virus does not hang around in the air, and you can’t get it from breathing around an infected person. It does not spread in food or water either, or via a mosquito bite.

Someone can spread Ebola even if they seem well.

Ebola is only contagious once a person starts having symptoms, and it seems to get more contagious as their symptoms worsen. That’s why people who may have been exposed to the virus are told to monitor their temperature. Fever is an early symptom (of Ebola and thousands of other illnesses). If someone being monitored gets a fever, they can be taken into isolation right away, decreasing the chances of passing the virus on to others.

People from affected African nations with a fever probably have Ebola.

Actually, they probably don’t – very few cases of Ebola have been exported from hard-hit countries into other areas of the world. People from Guinea, Liberia and Sierra Leone who have a fever may well have malaria - a much more common illness than Ebola – or typhoid, or the flu or any number of other infections. Fever is a warning sign but it is not a clear-cut signal someone has Ebola.

Ebola is always a deadly disease.

Ebola is a serious illness, no doubt. But the scientific community is only just learning about how people survive, and how to increase their chances. Early, supportive treatment like IV fluids and managing other symptoms can help improve outcomes for patients, which is why early diagnosis is so important. In this outbreak, it looks as though about 30% or more of infected people are surviving their infections.

The outbreak will be over as soon as we get a vaccine made.

First off, making vaccines is difficult work and requires a lot of time and other resources to test. Second, even if a successful vaccine is made, it will take some time to mass produce and distribute it. Third, it will likely be given to people caring for Ebola patients – not the general public in affected areas, who may not want it anyway depending on their cultural beliefs and trust in government/medical interventions. Stopping chains of transmission by identifying patients and getting them into treatment centres is a much more practical approach than waiting for a vaccine.