SUPPORTING MEMBERS IN THE AFTERMATH OF AN EARTHQUAKE.

Every year, natural disasters such as earthquakes, droughts, wildfires, hurricanes, floods and tsunamis occur around the world. Asia Pacific is the most disaster prone region in the world – according to the United Nations. Around the world, we are on the constant lookout for any event that can affect our members. When a disaster occurs, International SOS immediately activates a crisis management team to assist and support its members. Hotline revisits the events that took place during last year’s major earthquakes in Nepal and Malaysia:

This was the most powerful earthquake to hit the area for 80 years. It killed more than 8,000 people and injured 13,500 others. Besides the local population at least 300,000 tourists were in Nepal at the time.

We already knew that there was the potential for seismic activity in Nepal. Our team of travel security specialists that operate on a 24/7 basis spotted the earthquake as it happened at 11h56 local time. Aditya Luthra, Regional Security Information Manager, Asia Pacific, explains: “We immediately escalated the matter internally according to our set procedures. At 12h25 local time we alerted our clients and issued an advisory against travelling to the area.”


Our clients’ primary concern was to find out where exactly their employees were. Those who subscribed to TravelTracker had an advantage and we knew from their real time travel itineraries where they were.


As clients started verifying their staff’s locations, we offered our advice and support. Aditya continues: “The calls from our members were coming in fast, with more than 50% of the calls classified as complex - as they ranged from requests for specific information to missing people.”

As soon as flights were permitted to land we had a team on the ground in Kathmandu. This consisted of both security and medical specialists. Our security specialists focused on providing accurate and corroborated information that could be disseminated to our clients as well as to relocate members from the worst-affected areas of the country. Kathmandu Airport shut down immediately after the quake and was intermittently closed for the next 48 hours. When it fully reopened two days later, thousands of people were clamouring for flights. We advised our clients to stay away from the airport until they could secure seats. Our Assistance Centre began coordinating with the commercial airlines. We also liaised with different embassies who were arranging special flights for their citizens. Within the first few days after the Kathmandu airport re-opened, we were able to facilitate and assist our clients to move out of Kathmandu.

Another challenge was helping those in remote locations outside Kathmandu. Four of our members were trapped in Lukla, the starting point for treks to Everest base camp. While Lukla’s small airstrip was not damaged, there were no internal commercial flights available.

As Aditya explains: “From our research trips to the area, we knew the road infrastructure would have been severely damaged by the quake.” Given the lack of air and land options we advised members not to attempt the overland journey on their own and instead to remain in Lukla until other options became available.


We then set about organising a private flight for them by helicopter. However, all helicopters had been requisitioned by the government authorities for rescue efforts. When the government authorities briefly released a helicopter to be used by a local security provider, our pre-existing relationship with the provider ensured that we were given priority in arranging transport for our members in Lukla. We transported the four members back to Kathmandu, organised a hotel and they too were soon on a flight home. Meanwhile, our medical specialists had been busy too. They visited hospitals to locate and support any clients who may have been injured.

A MAGNITUDE 5.9 EARTHQUAKE STRUCK A MOUNTAIN IN SABAH, MALAYSIA ON 5 JUNE 2015

The earthquake was the strongest to affect Malaysia since 1976. The tremors from the quake triggered a landslide. 18 people died on Mount Kinabalu, while about 137 other people who were climbing the mountain were stranded, but were subsequently rescued.

At 7h15 local time we received the first call from a college student from an international school, who was at the peak of the mountain together with his school mates. They were instantly provided with security advice such as to remain in the current location (the damage to the path down the mountain was unclear), to conserve mobile phone life, food and water, and how to stay warm.


We remained constantly in touch with them until they returned back to Singapore. Within a few hours after the first call, we received a call from a national primary school who had 37 students and teachers at the mountain as part of an expedition. “In a crisis that involves mass casualties and plea for assistance, it is crucial that we keep our emotions in check and not lose focus”, says Dr David Teo, Regional Medical Director for South and Southeast Asia. Our crisis management team quickly deployed our medical and security experts from offices in Singapore, Malaysia and Thailand to Kota Kinabalu to assist our members and clients.

This included visiting and assessing the students and teachers in hospitals and immediately evacuating the ones that were fit to fly. We also sized up the situation by assessing the impacts of the earthquake on the roads en route to Kota Kinabalu. We did this over the next two days and the information was relayed back to the clients.

Throughout the next two days our crisis team worked closely with the local authorities whilst in Kota Kinabalu to get timely information with regard to the status of the search and rescue mission conducted by the local authorities. With this, we were able to provide scheduled updates to the relevant parties involved – thereby allowing them to make sound decisions.

As for the students and teachers who did not survive the earthquake, our local team provided emotional support to the relatives and also helped facilitate any necessary arrangements.

THE NEED TO LEAVE

Natural disasters have dramatic impact. As well as injuries to people, the infrastructure suffers huge damage. Communications can completely break down. Transportation is totally disrupted. Power supplies fail. Healthcare services soon face extreme pressure. Food, water, fuel and cash quickly become scarce. There is an increased risk of disease. There can even be a breakdown in law and order. Then there is the added risk of aftershocks making everything even worse.

When an incident occurs, having accurate medical and security information at hand at all times is vital. We provide our clients with reports containing urgent advice and detailed briefings on an ongoing basis. These include information on the constantly evolving travel situation, updates on the status of the hospitals, etc.

In the case of the two earthquakes, our Assistance Centres responded to the increasing number of client calls. We provided regular updates via email, social media and on the International SOS and Control Risks travel security website.

Much of this information came from our people on the ground. This is vital for accuracy. In a crisis, there are usually many media reports of growing unrest which are not verified. Thanks to our own sources we can set the record straight and calm clients’ concerns 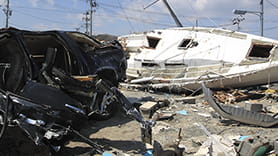 On March 11, 2011 an 8.9-magnitude earthquake occurred off the coast of Japan triggering consecutive disasters. International SOS provided assistance, evacuation, support and medical advice on radiation threat. 45% of global clients with TravelTracker have members in Japan. Read more on how we were able to help here.